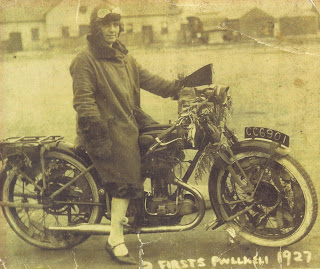 I once dedicated a blog post to my second cousin once removed artist, Handel Evans and if Blogger statistics are anything to go by it’s a fairly popular post. With that in mind and the fact it will be 20 years to this month that she passed away I decided to dedicate this post to my great grandmother Mary Hughes. Formerly Mary Jones, the daughter of a stonemason she was born in Nefyn, North Wales on the 17th of March 1907. Although not an artist she was a regular figure in my life and inspiration to me. I find that the enclosed photo taken in 1927 is the best example of the kind of woman she was, a keen motorcyclist she once came first in an all-male motorcycle race at Black Rock Sands.
Growing up I was fortunate to be living next-door to my grandmother so would see her almost every day throughout my childhood. In fact her former home is now my studio so I often find myself remembering the tales she used to tell me of her trips around the British Isles. Having married my grandfather, Cyril Hughes in 1929 she formed a haulage business, which she ran for over thirty years, driving the length and breadth of the country. Quite a feat when you consider that during this time she also managed to raise five children and maintain a full board guesthouse as well! In her later years she often recounted her trips around the British Isles once claiming to have seen Adolf Hitler in person at a garage when his car was fuelling up during a pre-WW2 visit to the British Isles. Although I have been unable to verify this story I was able to verify another incident that occured which Hitler had a hand in. She made many trips to Liverpool, more so during the war when she would transport rabbits when the War Office/Ministry of Food encouraged the consumption of rabbit to compensate for the meat shortage. She once told of the time she was delivering cargo to Liverpool when the John Lewis 's department store was hit during an air raid. She recounted seeing the blaze and the firemen trying to control the fire. What stood out in this story was that apparently amongst the panic and confusion she said that there were monkeys leaping about! Thanks to the Internet 20 years later I learnt that Lewis's department store actually had an exotic animals department, which was located on the top floor of the store.  Sometimes referred to as a rooftop zoo or ‘roof menagerie’ they sold exotic animals to members of the public (even selling the animals that had grown too big to Chester Zoo). On Saturday May 3, 1941 during a week of intensive bombing which were later dubbed the 'May Blitz' (making Liverpool the most bombed area outside London) Lewis's department store took a direct hit.
She stopped driving lorries in the 1960’s but would still embark on her trips, It was not uncommon for her to take a day trip to London and end up in France. This time favouring her trademark green Triumph as transport (until one day as she was driving along a lane and a cow leapt on it from a hedge writing the vehicle off!) To accompany my grandmother on these trips was an adventure in itself my mother recently recollected the time she was chased out of Kew Gardens by a staff member after “nain” tried to pilfer one of their plants! Everyone that knew her described her as a one off and this is absolutely true. As I mentioned previously her former home is now my studio, and has been for the last two years, not a day passes that I haven’t thought about her, remembering the times I would come in and see her after school. I still miss her to this very day and consider it to have been a privilege to get to know her for the first 13 years of my life.


2019 Edit: Hear her recount some of these stories on this clip taken from a 1986 episode of BBC Radio Wales’s show 'Roundabout'.


© Arfon Jones 2013. All images are copyrighted throughout the world.
Posted by Arfon Jones at 12:32 am