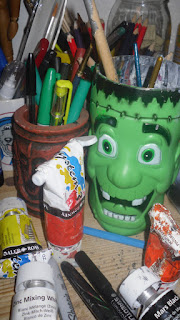 Happy New Year! Yes… I know it’s the last week of January 2013 and that I haven’t written a single post yet. But the simple truth is that things have been hectic here in the studio, still are in fact. I have several projects on the go, in the works and on the cards! Rest assured though that 2013 is going to be bigger, better and simply brimming over with creative projects. Interestingly, a continuing theme runs through all these projects a subject dear to my heart. At the risk of giving too much away I was reflecting over this reoccurring theme last weekend, what seemed to be a matter of concern for my teachers during my school days. One teacher shared this concern with my mother during a parent/ teacher’s evening stating that my, “Fascination with Ghosts, Ghouls and Goblins" was not natural. She was relentless in her futile efforts to deter me from my interest in monsters, aliens and all things paranormal. I recall one particular classroom outburst that resulted in her demanding that I return a (school-approved) book about classic Hollywood movies* back to the library because I was reading about horror. Having expressed her anguish at a photograph of Faye Wray in King Kong and Olga Baklanova in Freaks she claimed that my pursuit of such things was a waste of time, and so I dedicate this post to her. I knew she was wrong then, and it gives me immense pleasure proving her wrong twenty years later.

© Arfon Jones 2013. All images are copyrighted throughout the world.
Posted by Arfon Jones at 2:50 pm