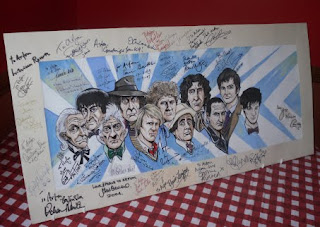 I think its about time I write about anther ongoing project of mine one that I have been working on since 2003 which reflects my passion for the television series Doctor Who…
April 2003: I attended a Doctor Who event, where I met the 6th Doctor Colin Baker. I obtained his autograph and decided I would attend other ‘Who’ related events in future. It then occurred to me that if I were to obtain the signatures of all the Doctors and companions I would require a great deal of space to display them. With Doctor Who’s 40th anniversary in November I set about creating a piece that would both commemorate this occasion and address the show’s history, depicting the Doctor’s incarnations. This would be what they signed in future, vowing to obtain the signatures of all the companions and Doctors by the Doctor’s 50th Anniversary in 2013!

September 2003: The week I finished the painting the BBC announced that Doctor Who was returning! I was pleased, however I found myself with a portrait that was already dated as the Doctor has 13 lives and I had only painted 8 there were several regenerations to go… So, I updated the painting, adding an extra section to accommodate for the future incarnations... With room to spare!

November 2003: The portrait was completed in time for the celebration with Tom Baker and Paul McGann 4th and 8th Doctor’s being the first to sign the portrait.

October 2005: The series had returned and was a smash hit. My alterations proved a wise move as I had 2 more incarnations to add, as the Doctor had regenerated into his tenth guise. David Tennant signed the piece 2-months before his Debut story ‘The Christmas Invasion’. Bringing the number Doctors that had signed to 5

March 2007: Peter Davison the 5th Doctor had proven to be a difficult signature to acquire, however I was able to add it to the piece tallying the number to 6 Doctors. A fellow fan pointed out that I didn’t have the signatures of the first 3 Doctors, stating “I would need to be able to raise the dead” to do so. Fearing that this oversight would detract from the other names, I decided to acquire their signatures through collectors.

September 2007: Obtained the signatures of the late Patrick Troughton and Jon Pertwee and altered the painting to accommodate them. Number of Doctors 8. My style had improved since first painting the portrait back in 2003 so I reworked the piece slightly.

August 2011: The 11th Doctor was announced in 2009 with his debut story in 2010 it would be another year before I was able to add his likeness to the portrait! Sadly in February of that year Nicholas Courtney who played the Brigadier a long running character in the programme died, Nick had signed the painting back in 2004 but I removed his signature to allow for Jon Pertwee’s in the hope of acquiring his signature again at a later date… I had a spare signature I had acquired prior to the alteration of the painting and so I added that that same week Bonnie Longford signed the painting tallying the number of companion signatures to 24. 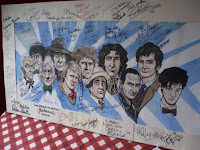 © Arfon Jones 2011. All images are copyrighted throughout the world.