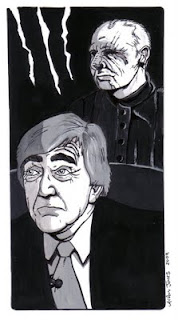 Saturday October 31st 1992 was a memorable day for me. I had always been an avid supporter of Halloween particularly the custom of ‘Trick or Treating’. Being 12 I (reluctantly) announced that this was to be the final time and I was retiring from ‘Trick or Treating. But, as there was no school the next day I could stay out as long as I wanted! The night was mine and this was going to be the big one!
However, I decided to be back home by 9:00pm because there was a television show that had caught my interest it was called GhostWatch.

Having previously viewed the BBC's CrimeWatch and Badger Watch we thought this show was in the same vein. And so with the faint smell of the turnip jack lantern’s candle burning out in the air we sat down as a family to watch the show. We missed the credits at the beginning believing that the show was ‘live’ were convinced that we could see the shape of a figure behind the curtains. I remember being engulfed in the show, turning to my parents and saying, “If this is real we are watching television history!” As the show progressed and Pipes unleashed his power and all hell broke loose it became apparent to us that it wasn’t real but we enjoyed the programme nevertheless.

I was right though, it did make television history. Stephen Volk’s Ghostwatch became one of the most controversial British television events ever. The BBC was undated with phone calls and letters from viewers both angry and scared. They were criticised by the newspapers for terrifying the Nation and so the BBC after assuring everyone that Michael Parkinson and Sarah Greene were safe vowed to never repeat the show again. After many years of wishing that I had recorded it and discussing it with others that also remembered it I was delighted to discover that British Film Institute had released it on DVD! 17 years later I was finally able to sit down and watch it again, all the memories of that Halloween night came flooding back to me!

There are behind-the-scenes information on the dvd along with a photo of actor Keith Ferrari made up as Pipes in all his glory! I couldn’t resist sketching him standing behind Michael Parkinson on the Ghostwatch set, and so ‘Ghostwatching’ became my little tribute to my favourite Halloween special.

Fans of the film will also be interested to know of filmmaker Richard Lawden's project Ghostwatch: Behind the Curtains a retrospective documentary about the programme that is currently in production.
Show your support and visit the site, share your memories of October 31st 1992… Happy Halloween

© Arfon Jones 2009. All images are copyrighted throughout the world
Posted by Arfon Jones at 1:30 pm